When you hear the word “how” you typically don’t think of a brand, you think of a question, like “how do you do something?” Or perhaps a statement like “this is how it’s done.” But two companies have taken to using the word as a brand, one company for quite a bit longer than the other, and this overlapping use is causing a trademark dispute over this simple word. 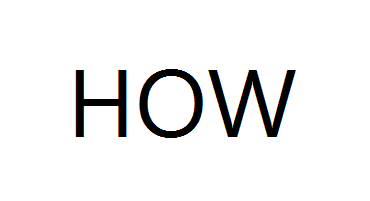 Dov Seidman is an author and consultant that focuses on helping companies develop a more ethical culture. Seidman suggests the central point of his ideas is distilled in the word “how.” He has written a book entitled, “How: Why How We Do Anything Means Everything.” To establish and protect his brand, he filed a trademark application on the word in 2008 in the classes of publications and educational services. He initially filed an intent-to-use trademark application. After Seidman filed a statement of use and showed use in commerce, the USPTO granted him a trademark registration for the mark HOW in 2012.

Everything was fine until a yogurt company came along. Chobani, a Greek Yogurt maker established in 2005, recently began using the tagline “How Matters” in several of its advertisements. The company’s ad campaign highlights how its yogurt is made and why the process makes it a superior product. Chobani is significantly invested in this branding and filed a trademark application on the term.

The campaign and trademark application are not sitting well with Seidman however, who has also used the phrase “how matters” in his writings. Seidman has filed a trademark infringement lawsuit against Chobani and the ad agency, Droga5, which created the campaign, claiming its use of “how” infringes on his trademark registration and damages over 10 years spent building up his brand.

In response, Chobani and Droga5 claim that Seidman’s trademark registration should be canceled because it is too broad, questioning how one can protect such a generic word as “how.” There is a spectrum of distinctiveness affecting the strength of a trademark from generic words, which are the weakest and not registrable, to arbitrary or fanciful words that are typically the most distinctive and strongest marks.

While it will be up to the court to decide the strength of Seidman’s trademark registration, Seidman’s biggest problem may come from the fact that the two companies are in pretty different industries. The crux of trademark law is to protect against likelihood of consumer confusion. It’s not clear that a consumer would get confused between the brand of a corporate consulting company and a yogurt maker. It will be interesting to see what kind of arguments their trademark attorney makes to support the claim of likelihood of confusion.